Be the first to ask a question about this.

Large-volume LPD 3D printers are widely used in various industries from automotive to aerospace. A team of former Ferrari engineers is working with our M300 model to prototype parts for their ultra-light motorcycle made almost entirely of carbon fiber. NASA is using the same Zortrax 3D printer to make functional models of tools that one day will help astronauts on missions to asteroids and other planets. Now, we have designed a new large-volume 3D printer for this kind of ingenious people and their ground-breaking projects. We call it the Zortrax M300 Dual. Print as you want

Various types of build platforms and a wide range of third-party filaments are fully supported. Not being limited to a single supplier allows choosing the setup perfectly tailored to the task at hand.

The M300 Dual is an efficient time-saving device fitted with advanced sensors to oversee the 3D printing process from start to finish with almost no supervision required.

The printer can reduce time lost due to power outages and various kinds of mechanical failures. In such cases the print is automatically paused and can be resumed right after the issue has been dealt with.

Its large workspace measuring 265x265x300 mm is sufficient to print big models in one go.

The LPD Plus technology works with two nozzles and a double hot-end.

The M300 Dual can detect a power outage and resume the printing from the same spot when the power is back on.

The CDS allows automatic calibration of the printer regardless of the type of build-platform installed.

The M300 Dual automatically pauses the print when the filament's jammed, run out, or when the nozzle got clogged.

Third-party filaments available on spools are fully supported in both single and dual extrusion modes.

Large format models made with
a desktop-sized 3D printer 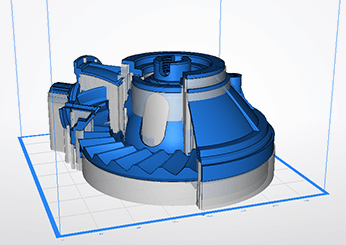 You can design models in all types of CAD software that support exporting files to .stl and .obj format or simply download them from the many online libraries. 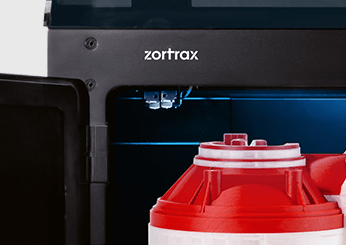 Z-SUITE can send an already pre-processed model to one or more of your printers over Wi-Fi or Ethernet network.

Water-soluble support filaments can be easily removed by rinsing. A dedicated Z-SUPPORT Premium dissolves quickly and leaves no remnants on the model.

Once the supports are removed, the model can work as a functional prototype or an end-use part in various industries.

Our work began with identifying top three challenges professionals face in working with large 3D printers. Here’s the list we came up with:

The M300 Dual has been designed from the ground up to meet those three challenges. And it does just that and way more.

How We Solved Large Complex Models

The printer works in the LPD Plus dual-extrusion technology which means it can 3D print simultaneously with two filaments: one for the model, and one for the water-soluble support structures.

Because water can remove supports even from almost inaccessible places that can’t be manually reached with tweezers, the M300 Dual can 3D print models with intricate internal geometries and movable mechanisms that would have been impossible for a single-extrusion 3D printer.

Moreover, the LPD Plus technology can boost up the production output when the printer is used for manufacturing. Soluble support makes it possible to stack batches of parts up one on top of the other. This way the entire build volume measuring 265x265x300 mm is used in each working cycle. The M300 Dual also supports a single extrusion mode where it works just like a standard M300 Plus machine.

How We Brought the Cost of Failure Down

Large-volume 3D printers tend to have longer work cycles than smaller ones because it takes more time to print large models. Such machines can run incessantly for several days to make one really big model. When a failure occurs close to the end of the cycle, that’s several days lost for the business. To deal with it, we have pinpointed three most prevalent causes of failed prints. It usually happens when:

We have designed the M300 Dual to save the print and easily recover from each of those events. The printer can detect a power outage. It’s built-in capacitors at all times store enough energy to keep the machine going until the exact position of the printing head is saved. This way the print can be resumed from the same spot when the power is back on. Same thing with the filament problems.

How You Can Work the Way You Want

Professionals usually expect their tools to be highly customizable. This way they can tailor their setup to better fit the particular project they’re working on at the moment. That’s why we have made the M300 Dual capable of supporting a wide range of third-party filaments and build-platforms. What’s even more important, we’ve made the printer work with them as seamlessly as though they were dedicated components or materials.

In fact, a user can opt for a build-platform made of material we didn’t even think of. The M300 Dual will support it.

Same thing with the filament. The printer works with all third-party filaments available on spools in both single and dual-extrusion modes. That enables professionals to work with all the filaments they need in the setup they think is best. The M300 Dual has been designed based on their feedback. We’ve just engineered it into reality.

As soon as you place your order, you will receive an order confirmation e-mail.  This means that we have received your order in our system and pre-authorized your credit card for the purchase.  As soon as we receive your order, we automatically reach out to our suppliers to confirm that it is in stock and available for immediate shipment.  If your item is on backorder or unavailable, we will void the pre-authorization and reach out to you via e-mail.  If your item(s) are available for immediate shipment (within 5 business days), we will process the charges and submit the order for shipment.

*For products that are imported from Chinese manufacturers directly for the sale, the customer is responsibe for any and all customs fees, duties, and tariffs that may be incured.  No tariffs will apply to any products, including Chinese manufacturered, that are shipped from the USA.  Please contact us at info@project3dprinters to clarify from where a product will be shipping.

Please inspect the packaging of your item(s) when they arrive, if you notice any damage you should make note of it when signing for delivery.  If your item(s) do arrived damaged, please send photos to returns@Project3DPrinters.com and we will process an insurance claim on your behalf.

We work very hard to ensure that we offer the absolute best prices online.  If you find another online store that offers a lower price than us within six months of your purchase date please let us know and we will refund your original payment for the difference.  We want you to feel confident that you are getting the absolute best price for the product you are ordering.  If you find that our own website has a lower price for the same item you have ordered within six months of your purchase date will refund the difference as well.

To request your partial refund simply e-mail us a link to the same product on our website, or on our competitors website within six months from the date of your order and we will process the credit accordingly.

Our 100% Price Guarantee has some limitations:

Why Buy from Us

At Project 3D Printers, we take great pride in servicing our customers to the best of our abilities.  No customer, nor purchase, is too big or too small.  We pride ourselves in getting to know our customers on a personal level so that we can help you find exactly what you need for a price that you can afford.

No, we're not Amazon, and we don't claim to be.  We may not be able to get your product tomorrow or the next day, but we can do something that Amazon cannot.....which is answer your questions and get you the support needed if and when you're having a problem.

We will always answer your questions, return your calls, and return your emails.  If we don't have the answers we'll get them from the manufacturer.  You'll never be left alone.  We stand by our high-quality products.

Project 3D Printers takes great pride in living up to its core values:

We believe that the customer and his or her needs come first.  We'll do all that we can make our customers fulfill their needs and make them happy with their purchases.  We pride ourselves on our support system.  If we don't have the answers we will not rest until we find them.

We know that things will sometimes go wrong.  Let's not kid ourselves.  It's unfortunate when they do, but we promise to be honest about the error and do all that we can to make it right.  We're value your patronage.  We hope that you have a great experience purchasing from us and will spread the word!

Get it first. Sign up now for up-to-the-minute offers, sales and news.